What is a vision quest? In any social group, certain symbols come to serve as points of orientation around which the culture develops. The axis mundi, or cosmic center, can be a geographical site, such as a sacred mountain. It can also be an artifact, such as a pole that is carried from place to place but represents at all times the center of the world. Essential is the experience of being connected to the archetypal realm, the numinous source of being and value. 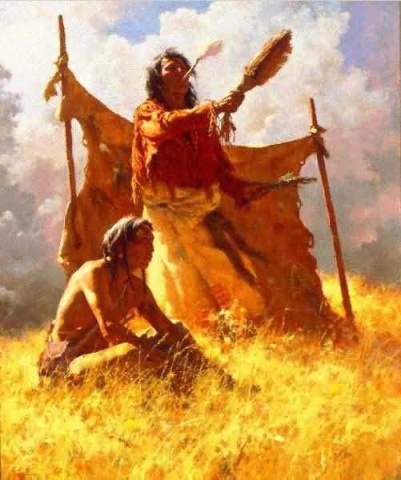 Among nomadic tribes in North America, the vision has served a comparable function. Direct inner experience of the gods has been cultivated and has come to serve as an orientating and sanctifying force for both the Native American and his community. The interpretation of visions and the techniques for integrating the vision into the life of the person and the group are highly developed among these peoples.

The vision quest can take place at any time, but it is usually undertaken first by a young Native American male as a rite of puberty. Often the boy will be separated from the group, left in a womblike hole in the ground, and surrounded by sacred things (a rattle, a blanket). Without food and sleep, he awaits the appearance of spirits. If he has a vision, it will serve to define his identity and role in the tribe from then on.

The vision quest is a model for any inner journey:

“The individual undertakes his inner quest, without any show of heroic strength and achieves it, not as a triumph, but as a submission to powers higher than himself. He accomplishes nothing by guile, which would be merely another form of heroic trial of strength. He is essentially a suppliant, not a man of power. He can count only upon his own intrinsic human worth and is of necessity his own teacher. He may be allowed to see the object of the heroic quest but not to possess it, or he may possess it briefly before losing it again, or he may derive spiritual insight from it as a talisman which comes and goes” (Henderson, 141).