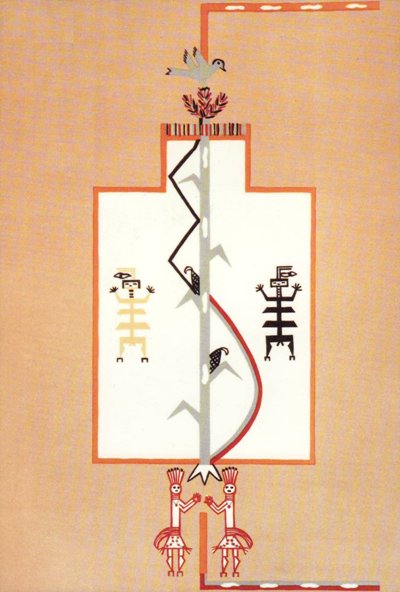 The magnificent sand paintings accompanying the legend of “Where the Two came to Their Father” depict all three of the “formal requirements” of the Hero’s journey elucidated by Campbell: the Departure, the Initiation, and the Return. The twin heroes, Monster Slayer and Child Born of the Water, voluntarily depart from the house of their mother and travel to the house of their father, who puts them through a series of initiation rites. Having passed these trials, the twins embark on an odyssey that brings them back again to the house of their mother where their journey began.

All along the way, the heroes repeatedly encounter obstacles, each of which has the potential to divert them from their path. Their ability to persevere on their chosen path appears to be not a consequence of their superior powers or knowledge but rather a function of their ability to assume a proper “heroic” attitude toward each adversary they meet. This adaptational attitude is perhaps best expressed in the words sa’a naghai bik’e hozho, the phrase constituting the climax or benediction of most Navaho prayers and songs.

Bik’e hozho (“on a trail of beauty”) is meant to convey the implicit “sense of place” that is required for an individual to maintain a proper attitude toward life. It is, after all, only by knowing where he stands that one becomes able to judge where he is going. The individual––here conceived as a male initiate—who gains this sense of place reveals through his balanced, alert, and restrained manner his tacit trust that from here he will be proceeding in the proper direction. The phrase sa’a naghai (“in old age wandering”) follows this idea to its inevitable conclusion: such manner of proceeding will lead the individual into an honorable old age.

The phrase “walking in beauty” expresses the Navaho’s movement toward resolution of an archetypal tension that is universally recognized. Explicitly, this tension—or tenseness—is the subject of debate in countless philosophies and critical theories. Implicitly, it is in the awkwardness felt by every individual who, faced with innumerable possibilities, wonders which path is best to choose.

It may be just this felt unresolved tension that represents the most important question addressed in the myth of “Where the Two Came to Their Father.”  Campbell suggests that existential anxiety is indeed central to all myth, and that, ultimately, its resolution lies not in the authority invested in myth, but in the active imagination of each individual:

A transcendent resolution of this counterplay is the implication of all myth, but the myth itself can reveal only the ground forms of the dissonance to be resolved. It remains for the initiate to leap in his own experience, past the limitations of the antipodal, self-contradictory statement to some unifying realization. (p. 78)

The Twin Heroes, the central metaphor of “Where the Two Came to Their Father,” most poignantly personify and vivify, this archetypal tension. Together, they represent an archetype of the potentially self-contradictory nature of the individual ego, which proceeding through a series of reunifying experiences, only gradually grows in strength and awareness. The “ground forms of the dissonance,” sewn into the fabric of the story in complex patterns of symbolism and imagery, are progressively revealed to the reader as the journey of the twin heroes unfolds.

ARCHTYPE OF THE TWIN HEROES.

Monster Slayer and Child Born of Water, as these Twin Heroes are called, are the most sacred of all the legendary heroes in Navaho mythology. It is rare for the Navaho even to speak of the twins; their presence is to be felt rather than observed, and their lessons absorbed rather than applied. Although the lessons the twins hold may be countless, their particular manifestation of a deeper, more complex image of masculinity deserves the reader’s especial attention. 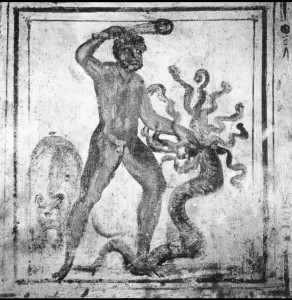 The hero Heracles (Lat. Hercules) is shown killing the Hydra.

In many of our best known Western European myths, masculinity, as paraded by Hercules and other heroes, emphasizes doing rather than being, a pure action without a basis in understanding. Our usual Hero is a solitary figure engaged in the protection or avengence of the Good. Yet, if we dig deep enough in the mythologies of most world cultures, we will find that, unlike a modern Western Superhero, the central male Hero of traditional myths was originally born as a twin. The phenomenon of twinship in male heroes is so pervasive that the analytical psychologist Edward Edinger has asserted that “… the individuated ego is destined to be born a twin.” (Edward F. Edinger, The Bible and the Psyche; Individuation Symbolism in the Old Testament. Toronto, Canada, Inner City Books, 1986, p. 36)

The theme of the Twin Heroes is documented in the mythologies of nearly every culture: it can be easily spotted in African, Mayan, Roman, Greek and Eastern Indian mythologies. In the West, we are most familiar with the rivalrous twins, like Romulus and Remus and Jacob and Esau, but many other examples of twin heroes, amicable as well as rivalrous, abound. (Joseph Campbell included in his commentary a detailed list of “hero couples,” pp. 36-37, which includes but is not limited to the “twin couples” emphasized here.)

Many of these twin couples remain buried in the annals of history. It is seldom recalled that even Hercules was born with a twin. There exist few records to illuminate the relationship between Hercules and his brother, Iphicles, but the fact that Iphicles’s existence was for the most part suppressed suggests that their relationship may have been rivalrous. It is even probably that Iphicles, whose name implies strength, was at one time a hero in his own right. (Philip E. Slater, The Glory of Hera. Boston, Beacon Press, 1968, pp. 381-383)

The suppression or sacrifice of the second twin is itself a well known theme in Indo-European folklore and mythology. Mythologist Jaan Puhvel has suggested that the very deepest layer of our “mythological layer cake” may contain “the primordial sacrifice of the Indo-European cosmic twin.” (Jaan Puhvel, Comparative Mythology. Baltimore, The Johns Hopkins University Press, 1987, p. 290) In Western patriarchal tradition, such sacrifice of the second twin seems to symbolize a deliberate repression of the yilding, balancing influence of the reflective portion of the masculine principle, the very capacity for reflection represented in “Where the Two Came to Their Father” by Child Born of Water. The masculine attributes of this twin, referring to spontaneously reactive, reciprocal, and affectionate emotional behaviors, have long been perceived as a potential threat to patriarchal orders that base themselves on strict division of “masculine” and “feminine” behaviors.  In our day, they have usually been regarded with suspicions as “sissy” or “gay.”

The archetype of the Twin Heroes, which offers without embarrassment a more balanced, holistic behavioral pattern for men, is central to nearly all New World mythologies.

Not surprisingly as it begins to rethink so much of what it has rejected as unmanly, our society seems to be in search of a new view of masculinity, and with it a new image of the heroic. Even Jung’s once progressive insights into masculinity now seem to be in need of revision. (In a recently published collection of Jung’s writings, Aspects of the Masculine, Princeton, Princeton University Press, 1989, John Beebe observes that “Jung’s idea of logos as the masculine principle and eros as the feminine principle has led to premature dogmatizing” in some Jungian circles.) It would not have surprised Jung, however, to find that the seeds of a new image of masculinity have been sown in Native American soil. The archetype of the Twin Heroes, which offers without embarrassment a more balanced, holistic behavioral pattern for men, is central to nearly all New World mythologies.