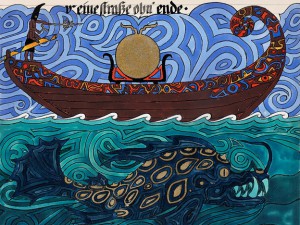 It is important to consider how the Twin archetype differs from the Shadow, which Jung posited as the predominant archetype representing one’s own gender and influencing relationships with one’s own sex.  The Shadow represents that which gets rejected by the conscious Ego.  It contains those potential feelings and behaviors that we choose to disown because they do not fit our “ego-ideal.”  Jung suggested that rejected shadow-impulses emerge in one’s “shadow projections.”

In our culture, the Lunar Twin is typically merged in the realm of the Shadow and can only be recognized in men’s damaging projections.  Men tend to project their Lunar Twin onto other men, seeing it as “effeminate” and “homosexual.”  In women, men often idealize lunar attributes, identifying them as the quintessence of “femininity.”  If the Lunar Twin remains undifferentiated within a man’s Shadow, he continues to prevent the possibility of a balanced relationship within himself and with other men or women.

While the lunar Twin still resides in the Shadow, a man’s Solar Twin exercises unmitigated power over all the dark contents of the Shadow.  The solar Ego is, by definition, the power of light over darkness: it does not “see into” the darkness of the Shadow; it simply erases the darkness, replacing it with light. 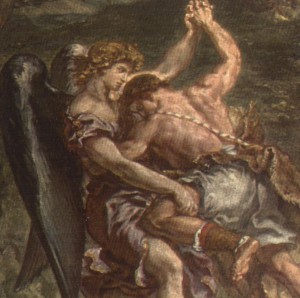 Jacob Wrestling with the Angel

If the Lunar Twin is identified in a man’s shadow projections and reclaimed from the feminine, his relationship to his own Shadow is radically altered.  The accepting Lunar Twin makes the solar/lunar twin-Ego more receptive to aspects of the Shadow that a solar Ego would obscure.  As its name implies, the Lunar Twin illuminates the darker side of a man’s nature, allowing him to experience the mysterious, numinous qualities of his being.  Once his Lunar Twin has been differentiated from the Shadow, brought into consciousness, and incorporated into a man’s Ego-ideal, a man can better relate to the Self.  A solar/lunar Ego-structure also allows him greater Ego-strength, or libido, with which to contain the negative, destructive forces that threaten his well-being.  Ultimately, the broader solar/lunar Ego-perspective may improve men’s relationships as well.  Much of men’s isolation, homophobia, and misogyny can be attributed to our failure to recognize the Lunar Twin as the “missing piece” in the male psyche.

In the course of my preliminary research in masculinity, the regular appearance of male twins in creation myths prompted me to notice this “missing piece in the masculine formula of alchemy.  In the “monocolus” stage of the alchemical equation, solar and lunar aspects of the masculine principle are fused in a preliminary “union of the same.  As a prerequisite step to the “union o opposites,” the importance of this stage in male individuation cannot be exaggerated.  It indicates that the bonding of solar/lunar aspects in a “union of the same” must take place before the male enters into a mature intra-psychic and external “union of opposites.” 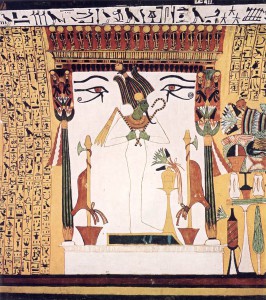 Osiris – Flanking his head are the left and right eyes of the falcon, the ‘wedjat’, and the ‘iret’, the moon and the sun, symbolic of the terrifying aspects of the Great Goddess and the completion of rebirth after death

This type of solar/lunar balancing is not confined to alchemy.  Most psychospiritual systems entail a transcendence of dualities as a prerequisite to spiritual awakening, and in nearly every case, the primary duality is portrayed in solar/lunar symbolism.  The incorporation and ultimate transcendence of both solar and lunar aspects are earmarks of such epic figures as Osiris, Dionysus, and the Christ, each of whom is described as having attained “a superior stage of psychopiritual development since in their androgynous and sacrificial nature they incorporate both the solar and lunar modes and transcend them in death.”  Osiris’s solar/lunar cycle is completed with the birth of his son, the solar bird Horus, whose “sun eye” and “moon eye” are symbolic of the changed vision that accompanies spiritual transformation.

In mythology, the predominance of male solar/lunar Twins is certainly indicative of the patriarchal bent of our histories.  It may also reflect a central difference in the male and female experiences of “otherness.”  Psychologically, the primary experience of separation from the mother seems to have a different impact on the male and female psyche.  The female appears to retain a capacity for intimacy with the mother, without the fear of dissolving into her.  The male, on the other hand, experiences a deep need for union with another, yet he ambivalently recoils from the mother, fearful of losing himself in her.  Should the male fill that primary need with a female, he runs the risk of regressing again toward the mother.  Yet his psychological balance requires an “other” to be able to “see” himself, or else he is likely to drown in narcissism.  It appears that the “twinning” of the mythological male may express the male’s deep need for a masculine “other” to generate the tension of contrast in his ego that he needs in order to have a frame of reference from which to view the Self.  This critical difference of ego-perspective, combined with the male attitude that predominates in myth, may account for the surplus of male twins.

However, many parallel myths entailing sister-sister and sister-brother pairs, as well as brother-brother twins, show that the implications of the solar/lunar Twins archetype extend well beyond the realm of the masculine.  Male-female Twin couples include Apollo (solar) and Artemis (lunar), and the Egyptian twins Shu (solar) and Tefnut (lunar).  In Japanese creation mythology, the sun goddess Amaterasu is formed when her father bathes his left eye; and her moon-god brother, Susano, is born of the father washing his right eye. 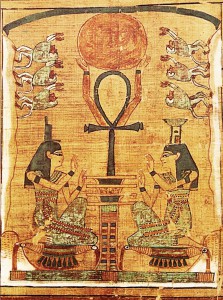 Hymn and Litany to Osiris – Center, djed pillar (Tet), the tree trunk which held the body of Osiris, from which proceeds the emblem of life (ankh) having arms supporting the disk of the sun; Isis and Nephthys, each wearing ceremonial wig, hieroglyph of name on head, kneeling on sign for gold, arms raised in adoration of the pillar.
Budge interprets the cynocephali as transformed openers of the eastern portals of heaven, representing the spirit of the dawn; the whole as representing the sunrise.

Among the most familiar examples of Twin sisters are the Egyptian goddesses Isis (solar) and Nephthys (lunar), who are born with twin brothers/husbands Osiris (lunar) and Set (solar).  Isis works with her lunar counterpart, Nephthys, to resurrect the male moon god, Osiris.  This paradigm is reflected in many folk legends which portray Twin brothers rescuing their imprisoned solar sister.  An earlier pair of Egyptian solar/lunar Twin sisters is Uatchit, the Vulture Goddess (solar), and her twin Nekhebet, the Cobra Goddess (lunar).  Uatchit and Nekhebet shared sovereignty of all of Egypt, and, for centuries, the pharaohs made a habit of inscribing the Twin sisters’ symbols over their tombs as insurance of power and protection for the passage into the netherworld.  Another Twin sister pair includes the divine Helen of Troy and her mortal twin, Clytemnestra, sisters of the twin brothers, Castor and Pollux.

The earmark patterns of mythological solar/lunar twinship are often duplicated in tales of non-twin siblings or heroic couples of both same and other sex.  Because of the ambiguity that pervades mythic relationships, the solar/lunar energies may be inscripted in many mythic characters other than Twin.  This is particularly true of female mythological figures who tend to display a dual nature, although they are rarely represented as Twins.  For example, the Iroquois creation myth features male Twins and a congruent female bipolarity represented in the Twins’ mother and grandmother.  When the mother is slain by one of her sons, the bereft grandmother takes her daughter’s corpse and creates from it the Sun and Moon and all the stars in the sky.

As the central paradigm of solar/lunar balancing, the Twins are likely to reappear with power now as we move into a century that will require universal, archetypal creation motifs to incorporate the various realities our new world encompasses.  The ongoing breakdown of patriarchal mythology throws us into a whirlpool of global mythologies that we must learn to navigate.  Just as we grew immeasurably from the ground-breaking work of Jung and his constituents, so too will the next generation benefit from new archetypal theories which, like Jung’s, seek to amplify complementary, compatible aspects of a variety of viewpoints, rather than reducing them to their least common denominators.  It is my hope that the solar/lunar perspective embodied in the archetype of the Twins will be one of many theories to contribute to ushering in our next stages of psychospiritual understanding.