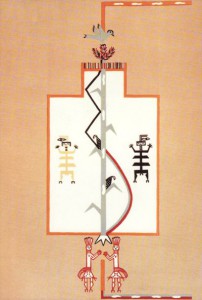 JOSEPH CAMPBELL HERO’S JOURNEY – Since the advent of quantum theory and relativity theory, the two bases of modern physics, it has been commonly accepted that the classic ideal of scientific objectivity is no longer supportable. In the scientific community, there is no longer doubt: the seer influences what is seen; and what is seen for the first time forever alters what follows. One of the most important distinguishing features of Joseph Campbell’s early scholarship was his acknowledgement of the male bias that pervades our recorded mythologies:

It is one of the curiosities and difficulties of our subject that its materials come to us for the most part through the agency of the male. The masters of the rites, the sages and prophets, and lastly our contemporary scholars of the subject, have usually been men; whereas, obviously, there has always been a feminine side to the picture also. (Primitive 352-353)

Campbell’s willingness to point out the gender bias of male mythology extends all the way back to his first published work, the extensive commentary accompanying the Navajo myth of Where the Two Came to Their Father (1943). The original publication consists of a beautiful folio containing eighteen silkscreens of Navajo sand paintings, reproduced by artist Maud Oakes under the direction of Navajo “Singer” Jeff King.

The two, Sun-child and Water-child, antagonistic yet cooperative, represent a single cosmic force, polarized, split, and turned against itself in mutual portions. The life-supporting sap-power, mysterious in the lunar rhythm of its tides, growing and decaying at a time, counters and tempers the solar file of the zenith, life- desiccating it its brilliance, yet by whose heat all lives.

The accompanying eighty-eight-page text booklet was comprised of two Navajo legends, recorded by Oakes and King together, along with extensive commentary by the young mythologist, Joseph Campbell. This first Campbell work explores the masculine initiation myth of the Navajo twin heroes in great depth. An empathic reading of the text, accompanied by meditative study of its sand paintings, may invoke in men an archetypal experience of what it means to be male in relationship to the feminine.

While Campbell’s readership tends to focus on the single male hero mythologem documented later in The Hero with a Thousand Faces (1949), Campbell presents his most complete treatment of a hero myth in the commentaries on the twin heroes mythologem accompanying Where the Two Came to Their Father (1943). As a paradigm for the development of the specifically male hero principle, the journey of the Navajo twin heroes is unrivalled in Campbell’s writing.

The twins, Monster Slayer and Child Born of Water, represent the “solar” and “lunar” aspects of the masculine ego, respectively:

The two, Sun-child and Water-child, antagonistic yet cooperative, represent a single cosmic force, polarized, split, and turned against itself in mutual portions. The life-supporting sap-power, mysterious in the lunar rhythm of its tides, growing and decaying at a time, counters and tempers the solar file of the zenith, life- desiccating it its brilliance, yet by whose heat all lives. (“Commentary” 63)

Campbell goes on to suggest that a dichotomy similar to the solar/lunar counterplay embodies in the twin heroes mythologem is a central motif of all myths:

Such cosmic dialect, under one guise or another, is a major theme of all mythology. There are cycles that stress the conflict, the antithesis of the poles; there are those that stress the cooperation, or synthesis. In legends of the Twin Hero type the two are displayed in concord, moving together in operations which redound to the benefit of mankind. (“Commentary” 63)

Indeed, Campbell’s scholarship was profoundly influenced by his understanding of the solar and lunar images of the masculine principle. Western patriarchal culture has consistently interpreted solar psychology as masculine and equated lunar psychology with the feminine. Yet many problems have resulted from our culturally distorted perception of solar and lunar principles. Moreover, a culturally distorted “solar” revisioning of Campbell’s hero, a bias which Campbell himself did not share, has contributed greatly to various misreadings of Campbell’s monomythic hero’s journey.

Just as the sun and the moon play complementary roles in nature, the solar and lunar modes of being are co-creators in human consciousness. (Solar Light, Lunar Light)