An old friend sent me a fb message this morning telling me she had a dream of me surrounded by very beautiful crystals….what could that mean?….Thank you in advance….

It does not get any better than to be surrounded by a very beautiful crystal.
Congratulations! Crystal is a symbol of unity, differentiation and flowing balance.
You are an ordered patterns of qualities that extends in all three spatial
dimensions Crystal as is associated with the “spirit.” Its veneration by mystical
speaks to that side of you. You possess a state, like a crystal, of transparency.
Transparence goes with the quality of being a trusted friend. Crystals represent a
union of opposites, matter exists but it can be seen through. The repeating chemical
structure of crystals is said to invest them with a kind of memory. This means
that crystals have the power to hold energies. Your crystal nature offers you
as an object of contemplation for others. As you know crystal possess healing
energies-a core of who you are.

Aloha Dr. Howard,
I just woke up and the last dream I can recall was I was walking through an airport with a piece of rolling carry on luggage; and the luggage was designed to hold this white snake. I was transporting it for a friend. And every time I looked down at the snake it had extended its body a little and was getting closer to my hand. I eventually dropped the suitcase for fear of being bitten.

Earlier in the night, I had another dream that contained a white snake; but I do not remember what I was doing in the dream.

So I guess the snake is the star here. What is that all about?

Snakes are one of the most important symbols of primal energy of the psyche. It is sacred to the divine healer, Asclepius of ancient Greece, who has embodied the daemon of “genius” intertwined with a black and white snake on his staff. Snakes are hidden forces, often dark and cold. They often accomplish the miracle of cure. They are an ominous warning, an awakening of a primal energy in your psyche. A serpent is an emblematic, primordial life force. Your psyche is asking you to not only transport some primal energy that your friend has, but also to take ownership of that quality in yourself that you are you are afraid of.

Bitting in a dream has a double meaning. It is your psyche insisting that you ingest and not be afraid of some primal instinct that is emerging in your life. It is like an imprint or seal of spirit that wants you to recognize its place in your life. Or it can signify a sudden and dangerous action of an instinct in your life.

A state of whiteness indicates that some part of us is not living and remains in an abstract or ideal state. That part wants to be embodied into your life. Baptism or initiates wear white vestments of rebirth, for simplicity and restoration. White can also mean a cold force, like that of the mythic Snow Queen of the north. In Moby Dick the Great White Whale conveys the indeﬁniteness and impersonal vastness of the universe and the human fears of annihilation. Yet the milky maternal ocean of Hindu myth speaks of the source of all the fundaments of the cosmos. In alchemy the whiteness or albedo was conceived as a state of illumination of the dawning the unknown personality into consciousness. Birth this part of yourself.

Hello Dr. Teich,
I can only remember a small part of my dream but I still wonder what it means:

There is a young man about 19-21 y.o. standing in a garden at night  a glass bottle hits him and there are twinkling shards everywhere. That’s the only part I can remember.
I would be glad if you could interpret my dream. Best wishes. P.S. I met that young man a week before

Hi [Anonymous],
Hitting in a dream is an attempt to activate, awaken something from the unconscious. Because it happens at night, it is something from the lunar modes of consciousness emotions, intuition etc. (See Solar Lunar Assessment Chart) :

A sparkling shard is a spiritual principle that emerges from the center of us, our soul/Self. In the Cabalistic tradition the soul scatters outwards its sparks to the world. Each sparkle is awakening from the great living ﬁre. The multitude of twinkling shards in your dream attest to your fertility to animate you life and the life of others with your vital essence. Take your sparkling energy and explore what this energy is to your life.

Congratulation for this awakening,
Howard

Hello Dr.Howard. I hope you can reply to me. I would like to know a meaning of one of my dreams… I dreamed about my ex-boyfriend… he was holding a little baby (boy) and in the dream we were married. What does it mean? I often dream that we get back together.

Hi [Anonymous],
This is what to ask yourself – what part of you is still psychological married to your ex? What was the potential that the relationship activated that did not manifest in reality. The relationship activated some new part of you that was born. A child in a dream represents a creative spark, a symbol of the future. Take ownership of that part and bring it to life like you would a real child. Be a single parent to that aspect of you. I cannot stress the importance of a child being born in a dream. It has the same magnitude psychologically as a real child does physically in one’s life.

I had another nightmare about my ex-partner Jeremy last night. This time i was outside of my home. I was gonna go down to the store. He was in his car following me with his friends. I tried to run but he cut me off and I ended up in the car with him.

Hi [Anonymous],
There are two questions that you could start off answering to yourself. One question, is what part of your relationship can’t you get away from that has been a nightmare for you? Usually what is our nightmares are often repeated items that need to be emotionally resolved not only from that relationship but often some reaction that is emotionally lingering from a similar stimulus from the past. What is being triggered off from the past? Also, in dream work it is important to do some active with the dream…talk to someone about the dream, dance or draw the dynamic. When we are embodying the dream we will often activated associative images and energy that will help up be liberated. Don’t be afraid to go into an experience even a nightmares. New information processing systems
supersede the previous traumatic patterns.. Your unconscious is asking you
conscious mind to process unﬁnished emotional material. 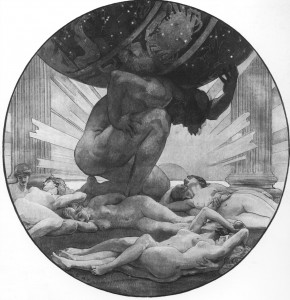 Atlas is an archetype, a primordial image of the collective unconscious psyche that we inherit. Personal experience serves to activate and develop the archetypal potential already present in the psychic-physical organism. Ultimately you cannot define an archetype, you can only experience it. The dream also shows archetypes are eternal and cannot be defeated. Instead of being able to defeat an aspect of the psyche, the end of the dream shows us that we need to engage in a non-warrior battle and follow our instincts since the warrior path does not work. END_OF_DOCUMENT_TOKEN_TO_BE_REPLACED