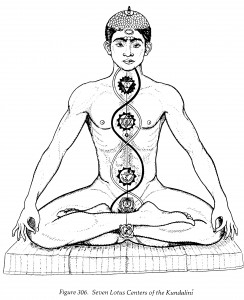 It was Gladys Reichard’s extensive study of Navaho symbolism in the book Navaho Religion that inspired Maud Oakes’s initial interest in studying Navaho sandpainting. As an artist, Oakes was immediately fascinated by the complex color systems in the paintings. The Navaho have two principal color systems, each including four colors to represent the four worlds or four directions that frame the Navaho universe. The two systems differ only in that black and white exchange places in the order they appear.

The arrangement of colors in each symbolic system does not derive merely from the aesthetic or decorative sensibilities of the Navaho, it has as well a cosmological significance. The ascending order of colors corresponds with the first through the fourth worlds in the myth of ascension. It is after the ascension from the four underworlds that the twins are born from their mother Changing Woman. The four-color Navaho system appears to correspond with the color system favored in European alchemy with the notable exception of the color blue.

Although curiously absent in many classic accounts of alchemy, the color blue does indeed appear in the alchemical process, representing a critical stage of the transformation process that failed to receive adequate notice. Before examining the Navaho use of this color (See James Hillman’s “ Alchemical Blue and the Unio Mentalis,” Spring 84), I would like to describe in some detail the point at which the color blue surfaces in alchemy because it represents a crucial step in the individuation process that seems to have been glossed over in Western psychology. (As always the role of symbolism in alchemy is to “manifest that which is hidden and conceal that which is manifest.”)

Jung recorded that the ultimate goal of alchemy, the “coniunctio,” or “union of opposites,” is achieved by combining the masculine and feminine principles with the common element, Mercurius. The female principle must first be produced by combining “salt” and “Mercurius” and two “sulphurs” entering combination with each other.

Wherefore saith the philosopher: He obtaineth the art who can manifest that which is hidden and conceal that which is manifest … The blue color after the yellow … (C.G. Jung, Collected Works, Vol. 14, Mysterium Coniunctionis. 2nd Edition. Princeton, Princeton University Press, 1970. p. 508)

This cryptic inscription suggests that the energy represented in the color blue, which signifies a union of solar and lunar aspects in the masculine psyche, is prerequisite to the final “union of the opposites,” masculine and feminine.

Jung did not recognize the significance of this preliminary stage in the male psyche. Throughout his alchemical research Jung consistently interpreted “lunar” symbolism as feminine and “solar” as masculine, so as to parallel and reinforce his anima/animus theory, which, like other systems of Western thought, implicit and explicit, separated energies into masculine and feminine categories.

A great deal of Jung’s research was devoted to locating the “feminine” energy that might compensate for the imbalance experienced in the masculine psyche. In dreams and vision, he searched for this missing link, which was often associated with the color blue: “There is but one more thing to ask: three there are, but where the fourth? Why is the color blue missing???” (C.G. Jung. Collected Works, Vol. XII, Psychology and Alchemy. 2nd Edition. Princeton, Princeton University Press, 1968, p. 213)

To be sure blue was the color of the Virgin in medieval and Renaissance art; so Jung was honoring a venerable tradition in assuming that blue was a color of feminine spirituality. What he failed to take into account was that, if the color blue represents the fusion of male solar and male lunar principles in the “monoculus,” then it is not an exclusively or inherently “feminine” energy. Rather, it is an energy that arises whenever solar and lunar aspects are experienced as complements, instead of opposite, a fact that is particularly numinous when experienced in the male psyche, where the color blue represents a truly masculine mystique.

The fact that the color blue is concealed in alchemy is symptomatic of a pervasive repression of this energy in the Western male psyche. Indeed, we find this fourth balancing element missing in almost all European representational systems, the most obvious example being the Christian trinity. It is this fourth balancing element, symbolized by the color blue of the second twin, Child Born of Water, that we might reclaim through an empathic understanding of the sand paintings illustrating the Twin Heroes’ journey in “Where the Two Came to Their Father.”

In the myth of “Where the Two Came to Their Father,” solar and lunar principles are represented in the complementary relationship of the twin masculine heroes, Monster Slayer and Child Born of Water. Campbell describes the twins as counterpoised parts of a powerful dialectic:

The two, Sun-child and Water-child, antagonistic yet cooperative, represent a single cosmic force polarized, split, and turned against itself in mutual portions. The life-supporting sap-power, mysterious in the lunar rhythm of its tides, growing and decaying at a time, counters and tempers the solar fire of the zenith, life-desiccating in its brilliance, yet by whose heat all lives. (p. 38)